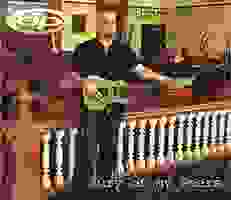 Submitted for the Court: Dave Paris – Jury of my Peers

In this world of instant gratification, fly-by-night pop-stars, and hit-making songwriting formulas, virtuoso guitarist Dave Paris has taken the road less traveled. The safe route would be to follow the path to the charts, create music that appeals to the masses, and provide the consistency and predictability that the general public expects. Why go against the grain in a music industry with so many vying for the attention span of the general public?

Guitarist Dave Paris has bucked that entire system. His latest release, “Jury of my Peers” appeals to those who want something different, something significant, something timeless. With his experience as a songwriter, session musician, producer, arranger, instructor, and performer, Dave set out to create songs that won’t take advantage of his audience but will instead give them something they are proud to listen to.

Musicians, particularly guitarists, are going to love this album but non-musicians will lock into the melody-intense songs with larger-than-life arrangements and production. This 13-song instrumental project combines hard and modern rock, blues, and a little funk into melodic sensibility using top-notch musicianship with just the right amount of technical precision. With arrangements to keep you humming along and playing air-guitar, the listener will become engulfed into a soundscape that they’ll want to make a part of their lives.

The album opener and lead single “Roman’s Road“ has particular importance to Dave as it was inspired by and dedicated to his young nephew, Roman, born four months premature. The music video for this tune features Roman and Dave’s nieces intermingled with footage of Roman’s plight from the hospital to home. Proceeds from the sale of the single are donated to charity.

Other highlights include a very raw, traditional blues piece, “Wood, Wire, Wind,” co-written by Dave’s good friend and collaborator Cyprian Alexzander. Dave’s contribution to this tune comes from a three-string, fretless cigar box guitar. Cyprian accompanies on harmonica. “Night Before Last”, a symphonic rock arrangement too big to fit into earbuds, features violinists from the Cedar Rapids Symphony Orchestra carrying the melody and backing Dave’s blistering solo work. For “Author of Fate”, Dave utilizes the eBow guitar effect to emulate a Moog-style keyboard in the progressive-metal vein. The straight-ahead, double-kick rhythm of “Free B” is pure modern rock with a driving groove and singable lead line.

The list of musicians on this recording reads more like a Who’s Who of the Midwest’s finest musicians. Dave takes this opportunity to work with the best players, not only to back up his arrangements but to step into the forefront when needed. Aside from stellar performances from his wife, Barbe Paris, on bass and keyboards, musicians whose resumes include associations with Jeff Watson, John Elephante, Stryper, and the Killers grace the tracks of this collection. World-renown guitarist Jeff Scheetz also guest-spots a solo on the blues-rock single “Chapter and Verse.”

Final mix down, editing, mastering, and design layout was handled by Doug Johnson at Cedar Rapids’ Recording Guy’s Studio. RGS Productions has worked on hundreds of internationally-known projects and artists over the years and has a reputation for major-label quality and hometown ethics.

A positive verdict of “Guilty” has been returned from the press, as reviews have been strong for the album. Diana Nolan of Hoopla states, “The entire project is a guilty pleasure of action-packed instrumentals.” Phillip “PhillyCheeze” Smith stated, “It’s so enjoyable to hear a guitar master such as Paris, do what he does best. Fresh and seriously focused, Jury of My Peers has edged its way onto my list of favorite instrumental rock albums.” John Molseed of Pulse Magazine comments that the album, “…demonstrates that instrumentation alone, even in a rock album, can add enough gravitas to be captivating.”

Jury of My Peers, as well as other singles, and the Dave Paris Group’s 2010 release “Words and Music” are available on iTunes, Amazon, Spotify, and other outlets. Visit the official website at daveparis.com for more info.

You can stream Jury of my Peers on iTunes, Spotify, Amazon, or anywhere you listen to music, as well as other songs featuring the Dave Paris Group.